Kanaga Island from the Tiglax

My time on Adak Island comes to an end with the arrival of the Motor Vessel (M/V) Tiglax (also known as the Research Vessel [R/V] Tiglax). The Tiglax (pronounced Tec-lah, meaning “eagle” in Unangam Tunuu) is a boat used for U.S. Fish and Wildlife Service scientific research. It serves the Alaska Maritime National Wildlife Refuge, which contains many of the Aleutian Islands. This summer, as in the past, Fish and Wildlife has kindly provided passage to Department of Energy contractors for our Amchitka Island scientific monitoring.

The Tiglax from the dock in Constantine Harbor, Amchitka Island

The 120-foot Tiglax was built in 1987 for Fish and Wildlife and has been working hard ever since. The captain, Billy Pepper, and five other crew members work hard as well. In fact, I can’t recall a time aboard the boat when I don’t see the cook at work. She conjures up handmade dishes like pesto-and-blue-cheese-stuffed pork roast, seafood linguine, and  blueberry pastries, all on a tight government budget, in a tiny galley, and with very little waste. I am an avid home cook and foodie, and I am impressed by her efforts in this remote place to keep both crew and passengers happy and well fed.

Craig Goodnight and me in flotation suits during the muster drill

Anyone who has taken a cruise aboard a ship will be familiar with the muster drill. Similar to the health and safety briefing given before all of the government contract work I have ever done, it familiarizes the passengers with the boat’s emergency procedures. In this case, it consists of what to do if there is trouble on the  Tiglax and we have to abandon ship. The vessel is well maintained, and the crew is highly experienced, but I can’t help but think, as I try on an insulated survival suit that will keep me alive and afloat should the unthinkable happen, “This is the friggin’ Bering Sea!”

The weather is beautiful, and the sea is calm as we depart for Amchitka Island. The Tiglax will be our home during the voyage and also while we are working on the island. We share the boat with several other teams who also have work there. One is from Fish and Wildlife, who have work characterizing one of the few old structures standing on the island. 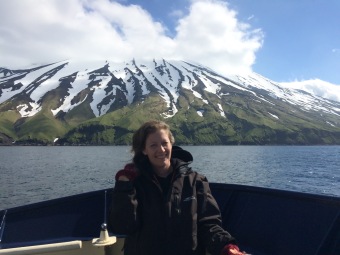 Danika Marshall on top of the Tiglax

The other is from the U.S. Geological Survey, who need to do maintenance on seismic monitoring equipment. Our voyage will take about a day. I spend most of the daylight hours outside, drinking in spectacular views from a perch with some of the other passengers on the top of the boat. Much of the night is spent crossing Amchitka Pass, a patch of open ocean where the waves grow large. I am jolted around in my bunk but manage to get a decent night’s sleep anyway. The first mate, John Faris, has spent the night at the helm, as he does every night during the field season. My experience on the Tiglax gives me even more respect for people who make their living on the Bering Sea. I’m not sure it’s a life I could thrive on. 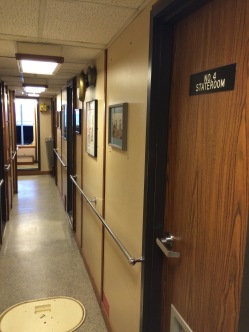 Left: The corridor outside State Room No. 4 on the Tiglax. Right: I choose the top bunk 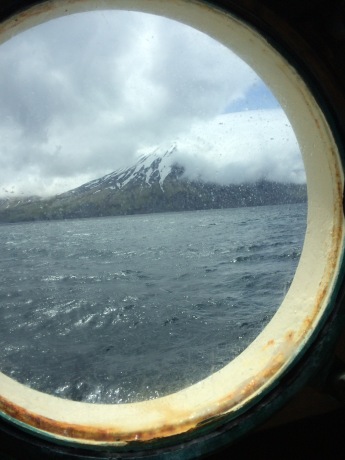 A peek outside the still vessel before coffee and breakfast reveals glassy waters and a massive, old military dock in Constantine Harbor, Amchitka Island. We have arrived safe and sound. I am ready and anxious to get to work. Now I just need to know how we’re going to get ashore. The smaller docks are in shambles, and the shoreline doesn’t look gentle with its dark volcanic rocks. The tide is out, and that ancient dock is towering above the top deck of the boat. Soon, we will find out.