Yesterday, we got back late from a long drive – or was it a short campout? – to a wild place in the middle of Wyoming. We had gone there like hundreds of others to witness the total eclipse of the sun. I had chosen the most remote place I could think of under the band of totality: the Gas Hills, thirty miles or so north of Jeffrey City. Jeffrey City swelled decades ago during the uranium boom but is now nearly a ghost town. The road north is all dirt and gravel, with ruts that challenged the abilities of our rented sedan.

The light looks like early evening, but the shadows look like midday a few minutes before the total solar eclipse in the Gas Hills of Wyoming

On the drive up, we stopped at the visitor’s center in the small town of Baggs, Wyoming, and the docent there told us that Thomas Edison had witnessed the last total eclipse in the area in 1918. It was on this trip near here, she said, that he came up with the idea for the incandescent light. She looked skeptical. So did I, but I now understand how a totality could spur the mind of a genius in such a way, so I’d like to believe it’s true.

The moon’s darkness approaches from the west

Nothing is ever exactly as you think it will be. No photo or video can really capture the experience of a total eclipse of the sun. It felt like the air temperature dropped ten degrees as a chill set into my hands. There was a scattering of stars in the midday sky, and crickets started to sing. The moon’s diffuse shadow engulfed us from the west as the sun’s light blinked out and in an instant, my solar viewing glasses went completely dark. 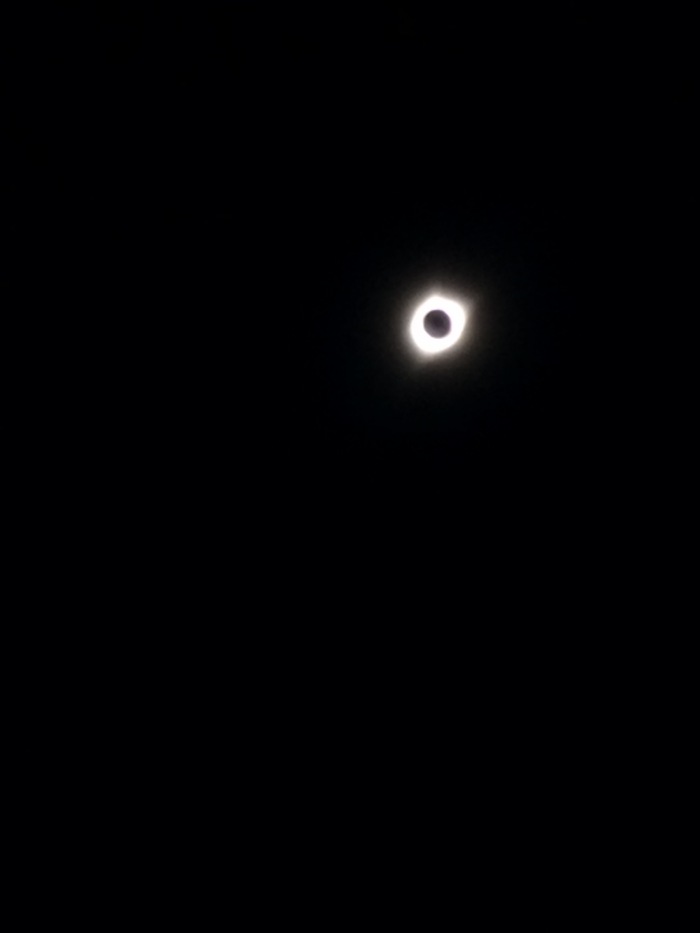 No photo can completely do it justice, but this is the best my iPhone could do

Pulling the glasses away, there was the corona, an iconic image high in the sky. What had been over my head but completely invisible to me for the past fifty-plus years was now revealed. It looked like a crown of vapor, a thin, glowing mist, immensely beautiful. It was a glimpse of a star from the heavens as it sent off its molten gases into space, but it was also oddly familiar, as if this image was somehow carried in human DNA. After only a couple of minutes, it was gone. One of the moon’s huge craters revealed a flash, followed by a sliver of searing light along the sun’s rim. The moon shadow’s darkness raced away to the east, and it was like late evening again. The crickets went silent, and three antelope in the distance went back to their grazing.

Within the hour, the day had fully returned, and we were – along with thousands of others – headed south toward home. The drive back was complicated by traffic, and we didn’t get in until after 11:00 pm, but the ancient dance between the sun and moon was well worth a little trouble.

A few of us are headed up to Wyoming today. The weather forecast is favorable to see the total solar eclipse tomorrow morning! It will be my first opportunity to see a totality.

Even if you are outside of the totality, nature can still put on a good show. During the eclipse in May 2012, the totality passed south of us. We looked through a pinhole camera at an image of the eclipse projected onto the sidewalk in front of our home. The real surprise came when we turned back toward the house, finding it bedecked with little eclipses!

The points of light created by gaps in the canopies of trees can serve as pinhole cameras and create quite a beautiful display. I wish all eclipse seekers and travelers a safe and happy day tomorrow!